Friday dawned nice and dry.  The forecast wasn’t great but it wasn’t supposed to get really bad until Saturday.

There have been sea lions cruising around the harbor looking for fish scraps and this one was hanging around the boat this morning.  We’d rather he found somewhere else to go.

Since it was nice out, we decided to go to Totem Park, the Sitka National Historical Park and check it out.  Here are a few of the beautiful totems in the park.

We took a nice walk on the trails in the park.  While we were on the beach trail we saw our old friend the Handler anchored out, apparently ready to buy fish.  I happened to get this picture with a fishing boat and a jet ski in the background all at the same time.  I told you this was a really boaty place. 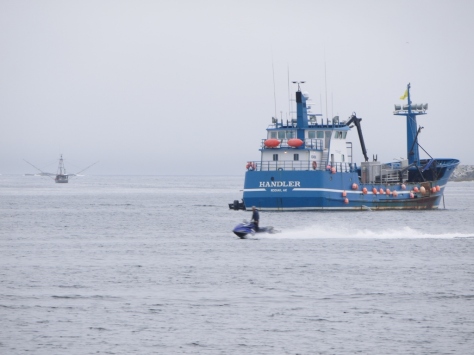 As we walked up Indian River you could see a bunch of spawning salmon headed upstream.  The river was full of them.  All the dark spots in the water are fish. 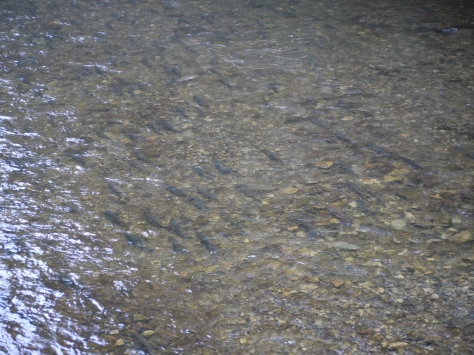 These ones were in a little side pool escaping the current for a moment before heading further up the river. 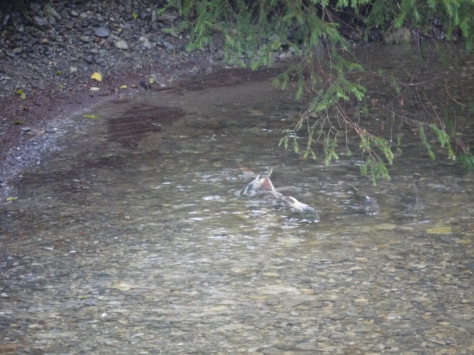 Down  the trail a bit we saw this tree with a vine and a berry.  It looked like a picture waiting to happen.

Then, of course, at the very end of the trail there were some stone steps.

It was a great little walk and we didn’t even get very wet.  After we were back on the boat, we saw the Coast Guard buoy tender Maple leaving the harbor.  There is a very large Coast Guard presence in Sitka and this very large boat to go with it.

After dinner, we went over to the Mean Queen, a local restaurant and bar and watched some Olympics.  All in all it was a very good day.

Saturday morning was very rainy and soggy, just like the forecasters had predicted.  I was feeling better about staying put in Sitka but that didn’t last long.  By early afternoon the rain quit and it was really quite nice outside.  I was getting a little upset with the forecasters by this time, we could have been two days into our trip south by now.  I kept telling myself it’s better to be safe than sorry and just because it was nice in town didn’t mean it was nice outside the harbor.

We went to town for coffee and since it was nice out we decided to go for a walk across the bridge.  I’d never walked across the bridge before so it seemed like an adventure. Here is a picture from the top of the bridge looking back towards Thomsen Harbor and Madeline.

When we got to the other side of the bridge, we were on Japonski Island where the airport, University, Coast Guard Station and Mount Edgecumbe High School and Hospital are located. We walked over to Sealing Cove Harbor where our friend Rich MacIntyre keeps his boat the Bear Bones to take a look. 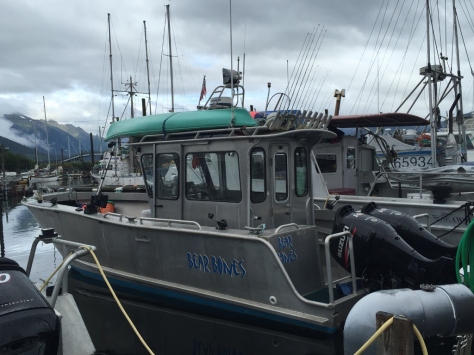 From the harbor entrance you could see the local lighthouse.  It’s not currently operational but it looks good.  I didn’t have Billy’s good camera so the picture’s a little fuzzy.

On the way back, Billy took this picture of the bridge.

We took this panoramic of the Sitka harbor area from the Japonski end of the bridge.

When we got back to town, I looked up and what did I see?  Blue sky.  Darn those forecasters.

Since it was still nice, we decided to take a drive out to Whale Park.  We didn’t see any whales but there were some sea lions.  These are the whale statues at the park. 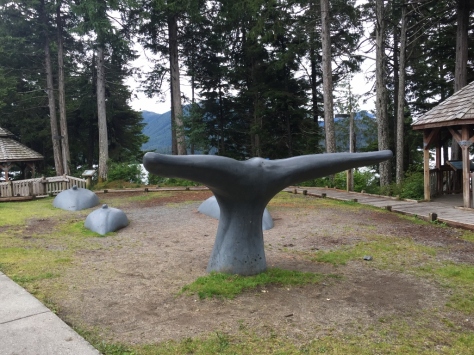 After the park, we went back to the boat and had some dinner.  Just after dinner it started to rain and get really windy.  The forecasters must have heard me cursing them.  The really nasty weather only lasted about half an hour although it was still pretty windy as I got ready for bed.  It’s very nice to be tied to a dock when the wind starts blowing!

Sunday morning was still pretty soggy and a bit breezy.  By late morning the rain had stopped so we decided to go for a walk to the harbor next door and check on their pump out station to see if it was any nicer than the one near us.  It wasn’t.  We looked around at some of the boats, including some really fancy ones, and from the end of one of their docks, we got a good shot of Madeline.

After we were done in the harbor, we decided to take a chance on the weather and walk to town for coffee.  On our way we passed the Pioneer Home and they had a hedge of Sitka roses and it seemed appropriate to get a picture of them into the blog.

The first coffee shop we stopped at was closed so we went to another that was open and really busy!  We lost our bet on the weather and by the time we left for the boat it was raining pretty steadily.  We made it back to the boat without too much trouble and were ready for lunch.  After lunch I went to the store while Billy filled the water tank in anticipation of leaving in the morning.  We also went through the charts and planned out a route to take for the next week or so.  It should be a lot of fun as long as the weather cooperates.  We’ll check the forecast again in the morning and as long as nothing changes, we’ll be off.  Keep your fingers crossed!

One thought on “Sitka, Week 2”