We stayed an extra day in Petersburg which was a nice rest.  It happened to be a Sunday so not much was going on in town and it rained a lot but we did get to walk around a bit during a dry period.  There was a big Sons of Norway Hall that was built in 1912.  It had a park on one side of the building with a replica Viking boat and a mariner’s memorial.  It’s a nice spot when the sun shines. 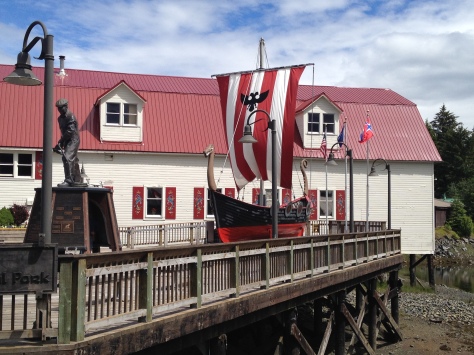 Later in the day I decided to do some laundry but it started raining so hard that I waited over an hour but it never let up. 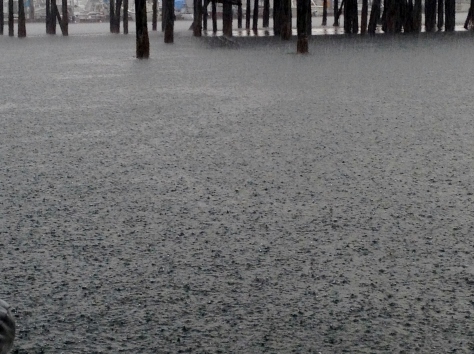 Finally, I put on my rain gear and hiked up to the Laundromat.  After I got there the rain let up and it wasn’t too bad for my trip back down to the boat with enough clean clothes to make it home.  We left Petersburg a little after 8 on Monday morning.  It was cloudy and rainy but the seas were calm.

When we got out of the narrows into Frederick Sound there were a couple of buoys covered in sea lions. 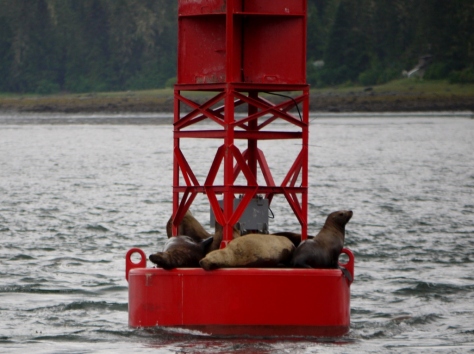 We went up Frederick Sound to Stephens Passage and the weather remained kind to us.  We saw some icebergs in the Sound from the Le Conte glacier.  We also saw quite a few whales all along the way.  They were the first icebergs and whales we saw on this trip.

We decided to anchor in Sandborn Canal after reading a glowing review in the guide book.  It really is a beautiful spot. 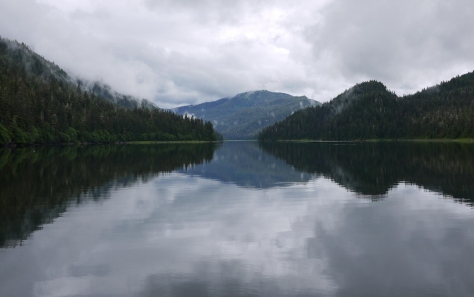 The guide book said we should see bears and moose and later in the evening we did see a moose.  It seemed to be browsing on seaweed along the shore for a while and then it swam across the canal, did something on the other side and then swam back across the canal before going up into the woods.  Hard to figure what it was up to.

There were a bunch of crab pot buoys all around the canal and the birds loved them.  There seemed to be one bird perched on each buoy most of the time.  We took the tender down and went for a ride to the head of the canal but no more wildlife was spotted. I guess we’ll have to be satisfied with the beautiful scenery. 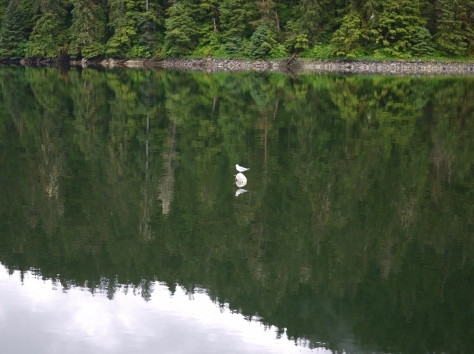