Well, it’s Sunday evening and we’re still in Prince Rupert.  Not that it’s not a nice enough place but I’m more than ready to move on.  It’s really windy right now in the harbor and everything is howling and creaking and groaning but hopefully it will blow itself out tonight so we can shove off in the morning.

There isn’t a  whole lot to report on.  We’ve been going to the coffee shop in the mornings and yesterday we went to the museum and the swimming pool for laps and showers.  Later in the afternoon I did laundry.  Nothing spectacular or exciting.  I did take a couple more pictures of the murals on the buildings in town.  They’re really well done.  There’s a good one of wolves near the swimming pool but I was in the car so didn’t have a way to stop and take a  picture.  Here are a couple of buildings right around the harbor.  The first two are different sides of the same building. 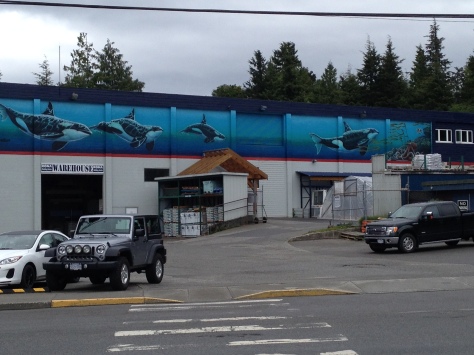 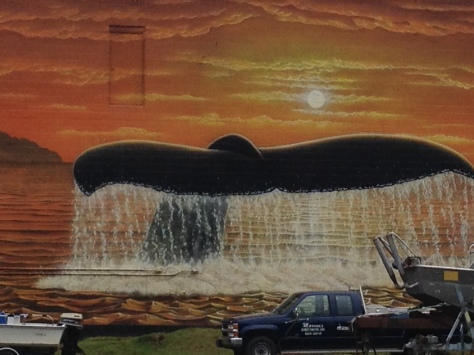 I also mentioned in an earlier post that we are right next to a busy fuel dock and there are frequently big traffic jams to get in for fuel.  We heard that there used to be two fuel docks in town but the other one closed down so this is it for marine fuel in Prince Rupert.

Every conceivable type of vessel has come in to get fuel from ferry boats to skiffs.  It’s been interesting to watch the commercial fishing boats fight for space on the dock, they are ruthless and have no concept of waiting their turn.  We’ve been really surprised that there hasn’t been more trouble but everyone seems to take it all in stride.  It’s kind of like the driving in Italy!

I wanted to get this post out before we left since we probably won’t have an internet connection for a few days until we reach Ketchikan.  Wish us luck on getting out of here tomorrow and for calm weather as well.  We should get some good pictures of our route out of Prince Rupert – it’s another scenic, narrow channel…

2 thoughts on “Still in Prince Rupert”