We departed Hartley Bay at 5:30am on Tuesday so that we could catch the currents up Grenville Channel and it sort of worked.

The direction of the current changes in the middle of this channel so it is optimum to start on a flood tide to take us up the channel and then have the tide change about half way up where the current changes so that it would continue to take us the rest of the way.  We missed the timing by about an hour but had decided the night before that getting up at 5am was as early as we were willing to do.  The morning was rainy and foggy as we made our way up the channel.  The weather improved as the day wore on so that when we got to our destination, Baker Inlet, we had some sunshine.

In order to enter Baker Inlet we had to go through Watts Narrows (another really narrow entrance channel).  Our guide book said that you should never go in on a flood tide.  Since it was an ebb tide we decided to go through but the current was quite strong and made for a pretty intense ride.  Luckily these narrows are relatively short, we will definitely leave on a slack tide! 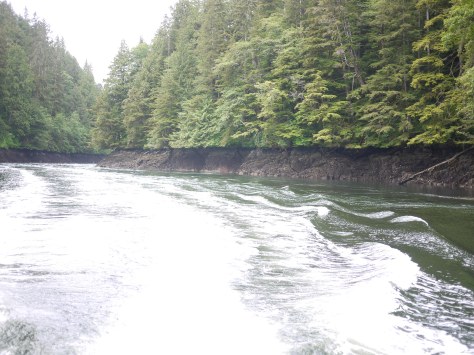 Once we got in the inlet we went six miles to the head and anchored behind a little islet.  We went by some seals on the way, it looked like they were laying on top of the water but it turned out there was some sort of mooring buoy that provided them a perch to enjoy the sun.

Just past the seals we saw a big, brown bear on the beach eating grass.  It is amazing how big those animals get eating grass and barnacles.

We also saw a pair of loons in the bay but we couldn’t get close enough to get pictures.

After we got the boat and ourselves situated, we got the tender down and took a ride in to the beach. It wasn’t really a walking beach so we didn’t stay long and besides there were bears.

We were hoping to be able to hear wolves howl at night, but that didn’t happen.  We did have an extremely peaceful night all by ourselves in the inlet.  We woke up to rainy and foggy conditions and started on our way to Prince Rupert.  We left at the slack tide and although Watts Narrows was still really narrow, with no current running it was a piece of cake getting out to Grenville Channel. 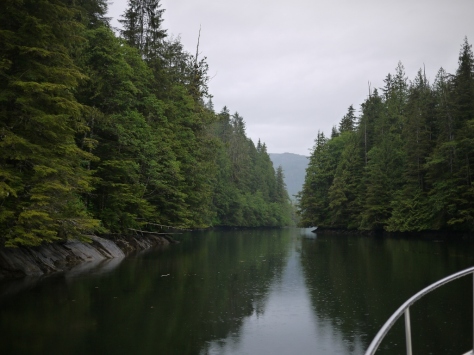 The trip to Prince Rupert was uneventful, there weren’t even any boats around until we got close.  Then there were boats everywhere!  There are boats of every shape and size imaginable here and they are zipping around all over the place.

We are staying at the Prince Rupert Rowing and Yacht Club, don’t be fooled by the name, remember the ‘resorts’ we stayed at along Vancouver Island?

The finger of the dock that goes along side our boat is the tippiest thing I’ve been on in a while.  If I don’t end up in the water here it will be amazing.

We’re parked right next to a super busy fuel dock which makes for a really roly ride that this marina is known for.  I hope it slows down in the evening.

It looks like a storm is brewing in Dixon Entrance which may have us stuck in Prince Rupert for a few days.  I’m hoping to get out sooner rather than later but if it’s really rough out there I’ll be happy to be tied up to a dock no matter where it is or how roly it is!

One thought on “Baker Inlet and Prince Rupert”